Borderlands 2 is only a couple of days away from us. In cooperation with CD Media and 2K Games we had the opportunity to answer some of the most important questions we have for the second game of the series. What is different, the new characters and the new foes that will challenge gamers are a few of the topics discussed in this interview.

1) Environments in the first game were vast but to a certain degree they lacked diversity and color. Will there be any significant difference in Borderlands 2?

You’re going to be seeing all different kinds of locations on Pandora. Icy wastelands, lush grasslands, technologically advanced cities filled with propaganda and killer robots – Borderlands 2 has a ton of brand new environments. You’ll be visiting all kinds of not-brown locales in Borderlands 2. Pandora has also changed pretty significantly. Five years have passed since the events of the first game. Pandora has seen a lot of changes. The Hyperion corporation has come to town and is cleaning up the frontier. The Vault Hunters from the previous game are now fugitives. You’re going to see a Pandora that is still wild, dangerous and untamed, but will feel different – almost like the planet is slowly being turned into a dictator’s paradise. The general philosophy for the game was that we wanted to make more of everything, and also make everything better — that’s whether we’re talking loot, or character classes, or, in this case, environments. We not only have more environments, but the environments themselves are ludicrously varied — you’ll go from snow to grass to dust to a pristine, futuristic city, all within a few hours. We want Borderlands 2 to be a true sequel — to deliver more, and better. 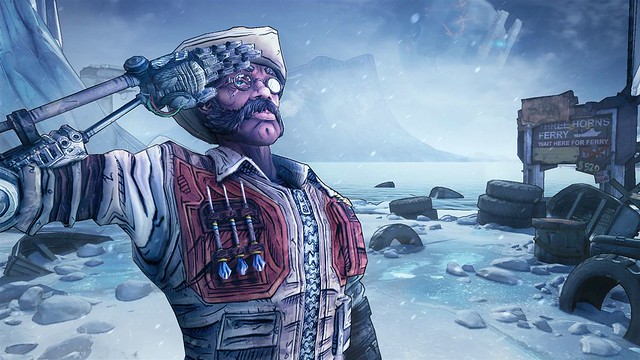 2) In the first game outposts and cities were very low populated and the number of NPCs was quite limited. Will cities be and feel more lively this time?

The cities will definitely be much livelier in Borderlands 2 and we also have a lot of new ways to tell the story using NPCs.  For example, we’ve really taken advantage of our Echo Device, the TV-screen/walkie talkie in the upper right.  If you’re talking with an NPC, and he’s giving you a mission, or backstory, you can start to walk away and the discussion will seamlessly flow to the Echo Device.  This way the player is not stuck waiting around the NPC to hear the narrative.
All four of the original playable characters from the first Borderlands also appear in Borderlands 2 as NPCs and each of them plays a very important role in the story, as do some other returning characters such as Scooter, Marcus, Tannis, and Moxxi. 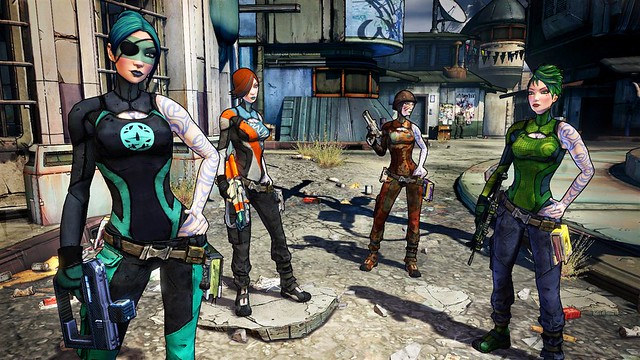 3) Different enemies in the first game behaved in the same way, rushing toward you, guns blazing. Will the AI be more advanced in Borderlands 2 and if yes, how?

We’ve nearly tripled the number of enemies in comparison to the first game. You’ll run into absolutely insane bad guys in Borderlands 2; soldiers who use midgets as human shields, Threshers who act as self-contained black holes, Varkids who morph into more powerful versions of themselves the more you damage them, and so on. You’ll also notice that the enemies’ AI has been drastically improved. You’ll see surveyors rebuilding limbs of wounded loaders, Nomads ordering bandits to flank the player, Fire Skags setting other Skags on fire… it’s pretty cool. 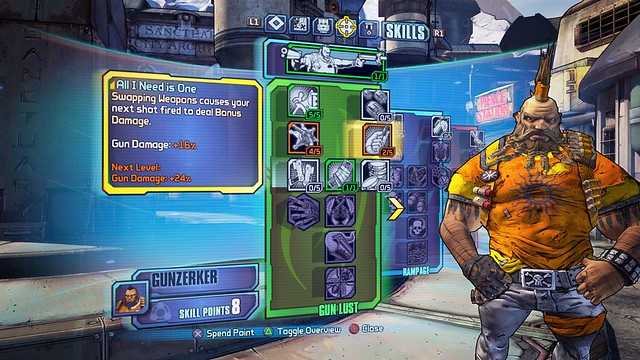 4) Borderlands had a really impressive arsenal! Will this trend continue, and will the weapons feel different or “heavier” than the ones in the first game?

Absolutely! A successful gun in a videogame needs strong ingredients from a variety of disciplines.  It needs to look cool, react to player input in a satisfying way, and sound awesome.  In the development of some of our Borderlands guns, we would only have two of these three ingredients down, and we wouldn’t believe strongly in the gun.  It might feel like it was firing too slowly, or the kick was obnoxiously big.  But once, say, audio went in and put a cracking boom sound for each shot, all the pieces came together and the light would come on.  Moments like that were really satisfying.

In addition to the return of fire, corrosive, shock, and explosive-based weaponry, we’re introducing a new element to the mix which is called ’Slag‘. Slag is a byproduct of the Eridium that has been released since the events at the end of the first game and the weapon manufacturers have been integrating this new element into their designs. Hit an enemy with a slag-based weapon shot and they’ll take much more damage from all sources, but be careful; if you’re afflicted by slag, you’ll take more damage too! Additionally, the weapon manufacturers have a more important gameplay role in Borderlands 2, with each brand having their own characteristics that distinguish them from each other.  A good example is our Tediore guns. Tediore is known for having guns that are extremely fast to reload.  Whenever you want to reload, you simply toss your Tediore gun away and it explodes, dealing damage based on how many bullets are left in the clip.  A new Tediore gun then digitizes back into your hands!  It is pretty awesome. We have a ton of different guns in the game with all of these different variations.  It’s still a bit too early to count exactly how many guns we have in the game but it already feels like an almost infinite amount!

Special Thank you to Vera “Fonikh Soupia”, CD Media, 2K Games and T. Keefe for their support and contribution to this interview.